Manuka Honey’s antibacterial properties have made it somewhat of a wonderfood for many people seeking “natural” alternatives to prescription antibiotics.

While prescription antibiotics can upset your microbiome and gut flora by killing “good” bacteria along with the bad, Manuka honey has no such side effect.

As the research grows on Manuka honey’s antibacterial potential, we are starting to see even more impressive results for it as an antibiotic alternative.

One of the most common stomach issues in the world today is the stomach bacteria h pylori. Both my sister and my father have suffered from this bacteria, some years ago when it was far less understood. It wasn’t until recently that doctors finally confirmed that basic antibiotics could kill the h pylori bacteria in the gut. In fact, the doctor who discovered the link between h pylori and stomach ulcers which lead to cancer, was Australian doctor Barry Marshall, who was awarded the 2005 Nobel prize in medicine for his discovery.

Once it was discovered stomach ulcers are caused by a bacterium (h pylori) and NOT stress, spicy foods or poor gut flora, the cure become much more obvious. Use antibiotics to kill the bacteria, and your ulcers will go away!

Now that we know antibiotics are an effective cure, can Manuka honey be used for stomach ulcers and h pylori instead of prescription antibiotics with the same effectiveness?

Let’s look at what the studies say.

Research on this goes back to 1991, where they found that natural honey had a inhibitory effect on H Pylori in vitro, at both solutions of 10% and 20% honey. In this same study they also found that Manuka honey was more effective, and that concentrations as low as 5% completely inhibited the growth of h pylori.

A later study in 1999 confirmed the findings, showing that manuka honey possessed antibacterial properties that were effective against h pylori.

A 2006 study found that in vitro, various honey brands possessed antibacterial activity against h pylori, and that they did not interfere with prescription antibiotics clarithromycin or amoxicillin.

Dr Fiona Radcliff from the University of Auckland, New Zealand undertook two laboratory studies using Manuka Honey to determine its effects on h pylori. She found the higher the UMF rating, the more likely it was to kill bacteria in liquid cultures. UMF 25+ rated honey had four times the ability to inhibit h pylori growth as UMF 5+ rated honey.

How to use Manuka Honey for H pylori

One important thing to note here is that all of these studies are in vitro, and any evidence of Manuka honey actually curing h pylori infections in real life are anecdotal.

That said, the research is promising and as one study above found, it did not interfere with the standard treatment.

So, while the standard treatment is still 10-14 days of antibiotics, one could still try Manuka honey as a complementary treatment or separate treatment if dealing with an h pylori infection and stomach ulcers.

It’s also a very safe and accessible alternative for someone who has tried treatment with antibiotics without success.

As the studies above note, honey with a higher UMF rating is more effective, with UMF 25+ being at least 4x more effective that UM5+.

If you’re looking for a high quality Manuka honey to try, you might want to check out our review of the top brands here!

As for how to take Manuka honey for h pylori, we would recommend eating it straight of the jar with a spoon. Beacuse heating or cooking with, or even adding it to hot drinks may change some of the properties of the honey, raw and straight is definitely the best way for medicinal purposes. 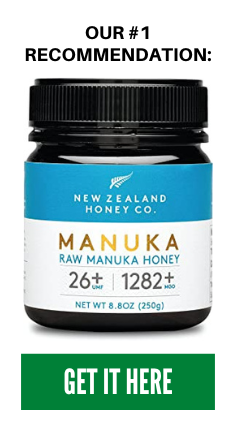